Carlos Hiller was born in Argentina in 1972. From early childhood, he has shown special interest in studying painting, music, and biology. During his restless early years, he traveled to remote places throughout South America, and survived river journeys in rudimentary rafts, living with native ethnics groups and gold prospectors in the Amazonia and Darién Jungle.

Motivated by this personal deep search, he moved from studying marine biology to exploring many years of ancient and modern artistic techniques, applying them to his underwater scenes paintings, and getting an extraordinary sense of deepness and dimensión.

As an avid diver and snorkeler, he often goes to the ocean to find the fascinating marine life that populates his creations. Carlos says, “The ocean makes me feel happy, and I like my paintings to reflect it. My aim is to capture these emotions. I like to feel that I am painting with fantastic material, and at the same time so intensely real that I dip my brushes in the waters of the ocean.”

Art is a powerful way to interact with the ocean, and he discovered the possibility of transmitting this idea, with the conviction that by beauty's appreciation, nature conservation comes. In this way, Carlos Hiller is always participating in campaigns and fundraisers activities of several environmental institutions.

The Melding of Iron and the Sea 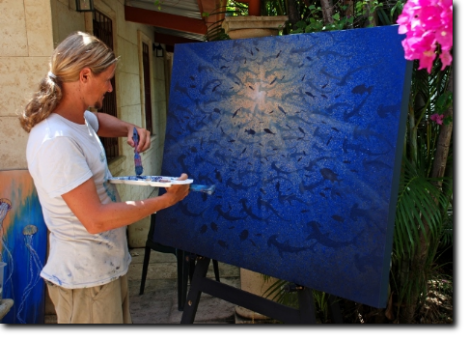 Live Painting: Carlos Hiller discovered that he has a special ability in performing and creating amazing paintings in minutes. Painting in front of an audience is something that Carlos feels is really moving.  A very special energy is created and the results are always amazing. Every time he gets the chance Carlos performs live paintings, where in the span of just minutes or a few hours, depending on the type of event, he paints in a display of color and energy.


Music and Painting: Bringing live painting sessions to a new level, Carlos decided to collaborate with Daniela Navarro, a young piano prodigy and native of the same small city where he resided for many years. Thus, two live painting events while Daniela interpreted classical music at the piano were realized with the purpose of collecting funds to finance her trips to international competitions. On both occasions the paintings created during those live sessions while Daniela played were auctioned and resulted in her being able to afford competing internationally. The success has been overwhelming and Daniela is now internationally recognized as one of the most important and promising figures of classical music, having already performed in important venues such as Carnegie Hall and the Kremlin, with recognized European symphony orchestras at the age of 13. Not only Carlos but the whole community who has supported and believed in her is proud and happy and feeling its participation in all the impressive achievements of Daniela Navarro.  In addition these events were instrumental in Carlos´ launching other public demonstrations of his art in order to create social change.